594 kHz Bulgaria now closes down at 2100 UTC. In Finland FRCN Kaduna has been heard after 2100 UTC by Mauno Ritola on this frequency. In Växjö the fq is covered by HR-Info.
1062 kHz Several Twoje Radio AM-stations can be heard in the evening under Italy and Czechia with the cuckoo clock interval signal on the hour. One of them has been identified by Jim Solatie of Finland as Twoje Radio Jaroslaw. It is located in south-east Poland near the town of Rseszow. It was heard at 1900 UTC. Power is 500 watts. Best reception in Sweden is around midnight local time when Italy closes down. (Bengt Ericson, Växjö, Sweden/ARC)
Upplagd av Ronny B Goode kl. 20:30 Inga kommentarer:

One of the most consistent TA signals over the years at our radio shack has been that of CFDR Kixx Country 780 out of Halifax, Nova Scotia, Canada. It is now leaving the AM band fór FM. You can read their farewell message on http://www.780kixx.ca/ (Jan Edh, Hudiksvall/ARC)
Upplagd av Ronny B Goode kl. 10:28 Inga kommentarer: 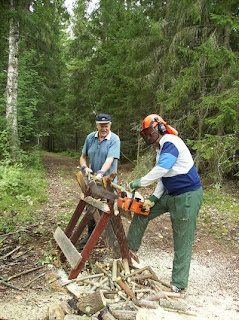 On 1602 kHz, July 19 at 2000 UTC a station came up with a Radio Beograd –ID. This was the 1 kW outlet at Sjenica, situated far south near the border of Montenegro. I also checked 882 kHz for Podgorica in Montenegro but without results. They are reported to having reduced their power below the nominal 5 kW. (Bengt Ericson, Växjö, Sweden/ARC)
Upplagd av Ronny B Goode kl. 13:24 Inga kommentarer:

Summer loggings from the Radio Shack

Fredriksfors July 16th.
For the first time in more than 3,5 month I tried the airwaves in Fredriksfors again (together with Rolf Larsson). Well, it was perhaps as expected (in other words rather lousy).The visits earlier this summer has been to stock up firewood for the coming season. And more is to come, we hope another good season...In the afternoon July 15th there had also been a club meeting for DRAK where mainly the hams had talked about their antennas and BBQ.When I arrived at a later hour only Rolf Larsson was left, and we started to listen after sunset.Up to 23 UTC there were no sign of Brasilian or other TA-signals. On 1566 I looked for the Italian but there was TWR Benin very dominant.Start again 01 UT with a slight ”top” around 02 UTC. Signals on several channels but most of them very weak. Except from the identified ones these could be mentioned: 920 (presumed Paraguay), 950 (Argentina?), 1130 (Spanish with news), 1180 (Rebelde?), 1290 (YV or Murialdo?), 1390, 1400 (religious, could be Harbour Light), 1470, 1500, 1620 (Argentina?).
Logg
Afrika
1566 15.7 2200 TWR Benin dominerade frekvensen. ”Afrikansk” franska. Nästan bara prat. JE
NA
1660 16.7 0140 WWRU Jersey City, NJ med koreanska. Reklamblock 0140. Gick bättre på 265-gradaren än på 285! JE
LA
1070 16.7 0212 LR1 Radio El Mundo Capital federal, BA med ett fint anrop efter nyheter. Morgonens ”bästa” signal. JE
1190 16.7 0200 LR9 Radio America, Capital federal, BA religiös. En stund tidigare spelades ”Video killed a radio star”, kan ju knappast ha varit den eller ”troliga”WLIB. Men ingen lösning. JE
1350 16.7 0205 LS6 Radio Buenos Aires, BA md ett anrop. JE
Upplagd av Ronny B Goode kl. 02:22 Inga kommentarer: