On May 8th a number of former staff members of Swedish offshore station Radio Nord joined a number of wellknown loved Swedish performers like Lill-Babs, Ann-Louise Hansson, Little Gerhard and others on stage in the De Geer Concert Hall in Norrköping for an evening of radio nostalgia. The event was organized by local promotor Håkan Thornell who also is a great Radio Nord enthusiast. As he stood the entire financial risk himself he may have lost some sleep during the past weeks but he need not have worried as the venue was sold out and even the orchestra-pit had to be used to make room for some extra 80 spectators. Around 1 500 guests attended this evening. 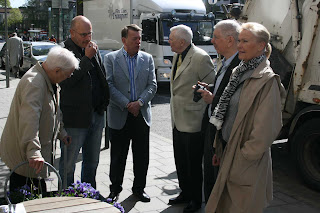 Of course the list of performers did spark a lot of interest. Many of them were also household names abroad in the 1960s/70s - and to a big extent they still are. But what’s so magical about a radio station that closed down 47 years ago? Obviously many do still remember Radio Nord and saw this event as a big nostalgia trip. Norrköping was within the primary coverage area of the station and many local baby boomers took the opportunity to reminisce the past. But also some younger people were there, who were not even born at the time when Radio Nord ruled the airwaves.

The evening started off with a vintage radio set on the dark stage blasting out the close down of the Swedish national programme as a contrast to Radio Nord. Then followed a very entertaining evening of radio memories interspersed with sets by the popular performers. Several of them had big hits in the Radio Nord charts and one group who made it big thanks to the station was the female sibling trio Göingeflickorna whose song Kära mor was actually banned by the state radio because it was considered too sentimental for the listeners! After being heavily plugged an Radio Nord the single sold in 250 000 copies and after the closure of the station the Swedish Broadcasting Corporation had to lift the ban as the song was requested again and again by the listeners. 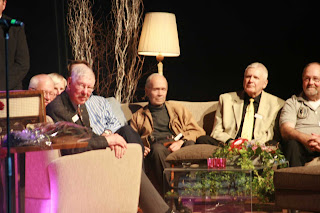 Although Radio Nord was financed by US investors its programme format was modified from American radio to suit the Swedish listeners. The competition from the state radio was mainly limited to the programme The Gramophone Hour once a week, starting and ending with a march and at the most containing two or three pieces of music that appealed to younger listeners. One of the Radio Nord staff present this evening, newsreader Lars Nestius, spent three years in the USA just before the start of Radio Nord and so had a very good knowledge of American radio. The frequent news bulletins were also something new in Swedish radio and another two former newsmen, Seve Ungermark and Lars Branje were present this evening. Seve and the head of the news department, Björn Fredrik Höijer, started building the news service six months before the start of Radio Nord and were also on the eventful voyage from Copenhagen, where the radio ship m/v Bon Jour was being fitted, to the anchorage just before Christmas 1960. During a storm the ship was abandoned on the high seas following orders by Captain Ohlsson, who incidentally was one of the first to leave his ship….

Radio engineer Owe Sjöström was also on the ship from Copenhagen and he told that he had never been so seasick in his entire life. After this voyage, however, he seem to have been cured and never had any problems since. He was later employed by Radio Caroline to set up the station on the m/v Fredericia, assisted by his former shipmate Jan Gunnarsson. Actually, he played an important part in British offshore radio history as he was approached by Caroline manager Ronan O’Rahilly who was very worried about the competition from Radio Atlanta that was also being fitted out at the Irish port of Greenore. 'If we could just get on the air first and give us five days, then the market will be ours' Ronan said. 'Could you do something about it?'. The result was that the two Swedes went over by a row boat to the other radio ship, now re-named m/v Mi Amigo, and asked to come aboard to have a look at their former working place. This was granted and while Jan was talking to the people on board Owe succeeded to sneak into the transmitter room to make some modifications. What he did was raising the cathode plugs in the final stage tube sockets which made the tubes go dead as soon as the transmitter was switched on. After replacing the tubes the same thing happened again and new tubes had to be ordered from the USA. This gave Radio Caroline the necessary advantage and Radio Atlanta was inevitably left behind. Perhaps not a nice thing to do but it should have become barred after all these years.

A couple of scoops were delivered by the news section: Seve Ungermark was first to announce for Swedish listeners the premier space voyage by a human astronaut, Gagarin. Lars Branje became the first to announce the death of Dag Hammarskjöld in a plane crash in Northern Rhodesia after the item was picked up on short wave. 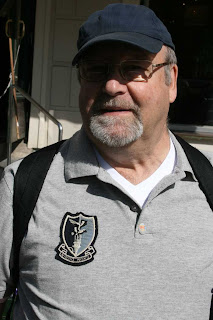 Technician Kenneth Agehed with the Radio Nord patch on his sweater.

The two hours originally planned for the event became almost the double but it seems like those present had a great time. A memorable occasion for nostalgic radio enthusiasts.

Loggings from Fredriksfors April 29-May 3